A Hand Reaches Out From the Toilet... Akagami Aogami

Tonight, the Spirits Will Be Resurrected!! Amanojaku

Episode 2: A Hand Reaches Out From the Toilet... Akagami Aogami is the second episode of the Ghost Stories anime. The alternate English dubbed title for this episode is Red Paper or Blue Paper.

Something is stinking up the town, and it isn't just urban reconstruction! A ghost has invaded the school's bathrooms, and it's up to Satsuki and the gang to find out how to put it back to sleep. The old book left by Satsuki's mom just might be the ticket.

While preparing to go to school, Satsuki and Keiichirou are followed by Amanojaku in Kaya's body. Although irritated, Satsuki continues on her way to school. At school, Mr. Sakata seats Satsuki next to Hajime, much to his chagrin. Later, Momoko and Satsuki read Kayako's old diary. They find out that due to the forest being chopped down, they will soon need to send more ghosts of the old school house to spiritual sleep.

The ghost Hanako, in an attempt to make friends, ends up creating a short-circuit in the sewer system of the school. Because of this, the students have to use the bathroom of the old school instead, where Akagami Aogami is present. Satsuki and Hajime decide to stop the ghost and enter the restroom of the old school house armed with the ghost diary. They dodge the Anatomy Doll ghost and encounter Momoko in the process. When in the bathroom, Satsuki accidentally invokes Hanako, who warns the trio not to enter the stall in which they were hiding out of fright due to her presence.

Just then, Akagami Aogami asks for red or blue paper and attempts to drag in Momoko, but Satsuki and Hajime pull her back in the nick of time. Akagami Aogami then drags Hajime inside. Amanojaku, who arrives at the scene, tells Satsuki to read the diary, where she discovers that if one answers "red", their blood will be drained out, and one answers "blue", they will be choked, turning blue with asphyxiation. She also reads that to put the spirit to spiritual sleep, a jar of water with the "Torii" symbol marked on it has to be brought near the toilet, while chanting "This stall is occupied."

Meanwhile, Hajime answers "yellow", but only angers Akagami Aogami. It drags him down forcefully, but Hajime clings to a pipe. Satsuki manages to find a jar and marks the symbol, but is unable to find water because the school's plumbing system is broken. Hajime, who is clinging to a pipe, gets dragged by Akagami Aogami into the spirit world. A heart-broken Satsuki starts crying, but unbeknownst to her, her tears fall into the jar, fulfilling effectively the requirement of water. Satsuki chants the spell, and Akagami Aogami is sealed into the jar, freeing Hajime. Their teacher, Mr. Sakata, whom the children thought was attacked by Hanako, also emerges from the toilet, revealing that he too was the victim of the ghost. Having sealed the ghost, the children leave the building. 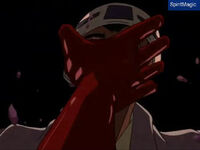 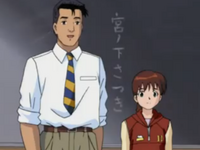 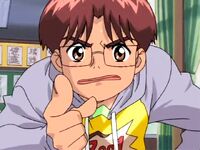 "It's a ghost! And you know you are behind on conspiracy." 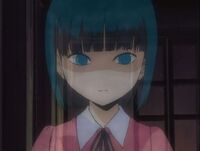 Hanako speaks to the gang 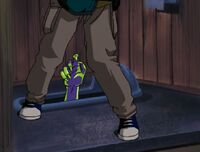 "What the fizzittyuck is that?" 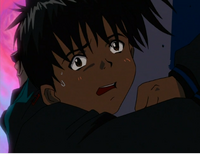 Hajime desperately clings onto a pipe
Add a photo to this gallery
Retrieved from "https://ghoststoriesanime.fandom.com/wiki/A_Hand_Reaches_out_of_The_Toilet...Akagami_Aogami?oldid=6043"
Community content is available under CC-BY-SA unless otherwise noted.