Start a Wiki
Hajime Aoyama (1990- (30 today), (Also known as Ned in the Latino Spanish Dub), is one of the main characters in the first season of The Gakkou No Kaidan Anime Series.

Hajime is Leo's best friend and Satsuki's next door neighbour. He is shown to be the "perverted boy", as he is always trying to see his female classmates' panties. He tries to look up her skirt, and other girls as well, but mainly Satsuki's, seeing as how she is his classmate and neighbor. He is shown to be good friends with Keiichirou, and treats him like a little brother. He also enjoys messing with Satsuki and can even be seen teasing her, with any chance he gets. However, he also cares and shows compassion for her, and has shown concern and worry towards Satsuki multiple times throughout the series. e.g apologising to her when he had called her ugly earlier. It was hinted that he may harbour some feelings towards her, and it was confirmed by the creator but, they never revealed their feelings for one another. Hajime is very reliable, when he is not overwhelmed with fear, and comes through for the group when needed. He also enjoys playing video-games.

Satsuki and Keiichirou first met Hajime when they arrived in their mother's family home, where she grew up. It is revealed that Hajime is their neighbour, and he noticed Satsuki's panties while she was laying down, which made her angry. Satsuki and Keiichirou then meet Hajime again, in the old building next to school. Hajime and his best friend Leo appears and says that they're "Ghost Hunters" and that they will help Satsuki to find her pet cat Kaya in the building. The next day, it is revealed that Satsuki is in the same class of Hajime and Leo. 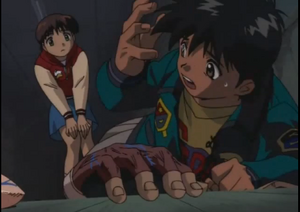 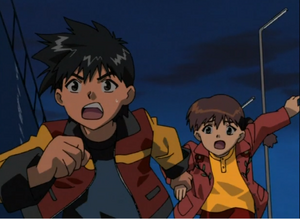 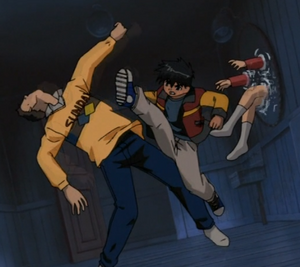 Hajime takes down Satsuki's dad
Add a photo to this gallery
Retrieved from "https://ghoststoriesanime.fandom.com/wiki/Hajime_Aoyama?oldid=6101"
Community content is available under CC-BY-SA unless otherwise noted.