Start a Wiki
Leo Kakinoki (1990-?) (voiced by Makoto Tsumura in the original Japanese dub and Greg Ayres in the ADV English dub) is one of the main characters in the Ghost Stories anime series.

Leo is Hajime's best friend. In the beginning he is shown to be the "nerd stereotype", however as the series runs, he start to show his personality. He is self-described as a specialist in ghosts and other supernatural phenomena. He is also a good friend of Satsuki. He likes Momoko, however he's too shy to admit it.

He often tries to use his logical brain to figure out the supernatural phenomenon he and his friends often find themselves in, but more often than not ends up at the wrong conclusion. However, he also often provides initial background on the ghosts and spirits through rumors and legends he hears or reads about online.

He is shown to be experienced with a camera, pictured in the theme song holding one and often using one to document the supernatural activities he and his friends experience.

Leo is shown to have an arrogant streak and a weakness to pride as demonstrated in Episode 8 where he diligently seeks to prove Yomi-net, the fabled ghostly webpage, is real to his friends who don't believe in it, and also becomes quite diva-ish when he takes the lead in the school Fine Arts festival in Episode 3.

In the ADV Dub Leo and his family are Jewish. 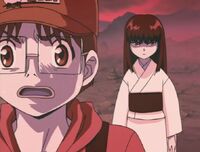 Leo is surprised by Datsueba 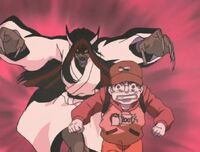 Leo's mother after being swapped by Utsushimi 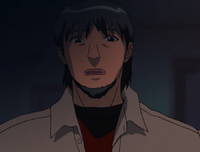 Episode 19. Leo's Dad
Add a photo to this gallery
Retrieved from "https://ghoststoriesanime.fandom.com/wiki/Leo_Kakinoki?oldid=6773"
Community content is available under CC-BY-SA unless otherwise noted.