Start a Wiki
Satsuki Miyanoshita, (Claire, in the Latin Spanish dub) is one of the main characters of Ghost Stories anime series. She is a 5th grade student in class 3 at Amanogawa School.

Satsuki has a fair skin, reddish brown hair, and green eyes just like her mother. She was almost always shown wearing a red jacket with cream arms and a blue skirt. Although her outfits may alternate in some episodes, Satsuki always braids her hair with a pink ribbon. She was also shown wearing white sock and black shoes. In episode 5 she start wearing shorts under her skirt to prevent Hajime from seeing her underwear.

Satsuki can be quite mature for her age. She cares a lot and is protective of her little brother Keiichirou. In the absence of their mother Kayako, she has helped raise Keiichirou and has become a beloved figure for him. She also does the housework, which she refers to as the "work of a housewife". Because of Keiichirou, she tries to give a strong appearance in order to protect him, such as trying not to be scared when she actually is.

In a few episodes, she's also shown to be very smart, for example to know how to stop Akane in episode 18. Satsuki is very strong and determined within, but sometimes a bit moody, mostly because of Hajime and Leo's reckless behavior (although these are usually instigated by Hajime). In ADV dub, she shown to be more petulant and stubborn.

She is very self-conscious about her appearance, while others (mainly Hajime) will mock her looks. Highly aggressive, Satsuki is prone to giving violent threats, such as threatening to put duct tape over the air holes of Amanojaku's carrier. She is however, on good terms with Hajime and Leo. It is hinted that she may harbor some feelings toward Hajime, and it was confirmed by the anime's creator. Satsuki is also Momoko's best friend, and generally gets along with the students at Amanogawa School.

Satsuki was born in May 1990. Her mother, Kayako, died when Satsuki was only 5 years old. When Satsuki was 11, she moved with her brother Keiichirou and her father Reiichirou from Tokyo to her mother's hometown, and found out that the old schoolhouse next to her school is haunted. She met some new friends at her new school: Hajime, her next door neighbour; Leo, Hajime's best friend; and Momoko, her best friend. Satsuki found out that her mother confronted several evil entities that haunted the town, which included Amanojaku who possesed her cat Kaya, and wrote all her supernatural experiences in a diary, which is entitled "The Ghost Journal". Now that the seals have been broken, all the ghost are free again. It's up to Satsuki and her friends to seal them away. 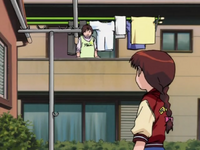 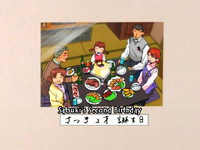 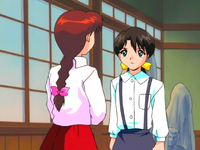 Satsuki with her mother in the past

Her cute jacket in Episode 7

Fleeing with Hajime. This happens all too often.
Add a photo to this gallery
Retrieved from "https://ghoststoriesanime.fandom.com/wiki/Satsuki_Miyanoshita?oldid=6821"
Community content is available under CC-BY-SA unless otherwise noted.