The Devil's Spell - Ritual of Darkness

The Ghost Photograph That Takes Lives - Railroad Crossing of Evil

Episode 15: The Devil's Spell - Ritual of Darkness is the 15th episode of the Ghost Stories anime. The alternate English dubbed title of this episode is New Girl.

The newest fashion in Satsuki's school is making charms: spells for having a boyfriend, having money, becoming thinner... However, a transfer student says they can have any wish granted, for a price...

Opening: A girl sits alone in a dark and empty classroom with an Ouija board. She summons a ghost that attacks her.

Shinobu Matsuba is introduced as Satsuki's new classmate. She has knowledge of black magic and convinces a group of girls, including Satsuki, to perform another ritual, saying that if they do, they could have anything they desire. They do so, and everyone makes a secret wish.

The ritual was actually a trap for Yamime to steal the souls of the girls, and erase them from existence. First Aya disappears, then Tomomi. When Satsuki calls Tomomi's house, Tomomi's mom says that there is no Tomomi in that house.

After Satsuki discovers the plan, Yamime appears at her house to attack her. Satsuki consults the ghost diary and is told to "bind her with red string and bathe her in sunlight." Satsuki finds she has no red string and instead draws red lines with lipstick on her closet mirror in place of string so when Yamime looks into it, it appears as if she were tied up. To bathe her in sunlight, she uses a camera flash on Yamime, putting her to spiritual sleep. The next day, the girls who had been erased returned.

It is revealed that Shinobu was a classmate of Satsuki's mother who had gone missing under mysterious circumstances 28 years ago. 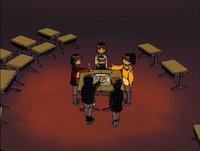 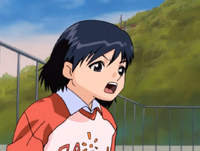 Misono angry that Shinobu deceived them

Yamime is captured by Satsuki
Add a photo to this gallery
Retrieved from "https://ghoststoriesanime.fandom.com/wiki/The_Devil%27s_Spell:_Rites_of_Darkness?oldid=6595"
Community content is available under CC-BY-SA unless otherwise noted.