Tonight, the Spirits Will Be Resurrected! Amanojaku

A Hand Reaches Out From The Toilet... Akagami Aogami

Episode 1: Tonight, the Spirits Will Be Resurrected!! Amanojaku is the first episode of the Ghost Stories anime. The alternate English dubbed title for this episode is The Awakening.

Moving to a new town is tough on kids. Nothing is familiar, and with no friends, it can be scary. In Satsuki's case, that last part isn't helped any when she, her little brother, and three kids from school end up in the old schoolhouse, which just so happens to be haunted by ghosts.

Opening: A janitor is attacked by an evil force; he screams but nobody can hear him.

Satsuki and her brother Keiichirou move to the house where her dead mother grew up, along with their father and cat Kaya. While exploring their new house, Satsuki and Keiichirou meet Hajime, who is spying from next door. The two of them argue with each other before Reiichirou asks the kids to help him with moving.

Next, they meet Amanojaku, who chases them around the school house. Kaya knocks over a picture frame, which causes Satsuki find a book. It says that in order to banish the demon to the old camphor tree behind the school, they need to draw a circle and chant, "Jaku, Jaku, go to sleep!" They do so, and the ghost disappears. After looking at the cover of the book, Satsuki discovers that it is actually her mother's old diary.

The children return to the new school building when they hear the bell ring. Unfortunately, they have missed their entire first day of school. Additionally, they find that Amanojaku has become locked inside the body of Kaya, since the old camphor tree Amanojaku was supposed to return to was chopped down. The children decide to keep an eye on Kaya for the timebeing. 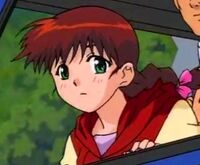 Satsuki looks out the window 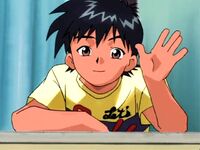 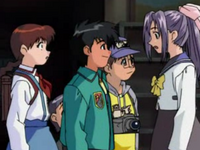 "Let's you and I be friends, Satsuki." - "No orphan is that lonely"

"Who would want to be friends with you anyways? Especially after the grudge I've held against you for years!" 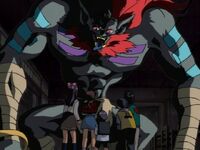 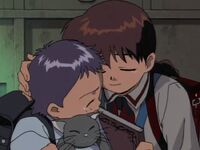 Satsuki and Keiichirou are relieved 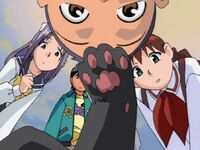 Amanojaku attempts to swipe at the children

"Why don't you just kill the cat, and I can go back to haunting that school?" - "Not an option, but neutering is!"

Amanojaku possessing Kaya
Amanojaku.jpg
Amanojaku at the end of the episode
Add a photo to this gallery
Retrieved from "https://ghoststoriesanime.fandom.com/wiki/Tonight_the_Spirits_Will_Be_Resurrected!_Amanojaku?oldid=6287"
Community content is available under CC-BY-SA unless otherwise noted.